﻿ Was swimming in the Belmont Hills Pool at 7:25pm last night (Thu July 26), when lifeguards abruptly told everyone to get out due to thunder... I wasn't alone in my dismay. Didn't hear any thunder and though the sky was overcast, it didn't have any of the usual threatening tones indicating a storm closer than an hour or so away.

I Assumed the Guards had a party or something and wanted to shut down early, but what are you gonna do but get out and take a shower? I will never doubt the LM Swim Authorities again and ashamed to say I did. Because when I emerged from the changing room ten minutes later, the sky was a roiling, boiling, growl of black bulbous Mushroom clouds like I have never around here - CGI-style, cinematic jumbled with apocalyptic are the best terms I can find to describe.﻿
﻿﻿
﻿In the minute it took to reach the safety of my car and retrieved my cell phone for photographs, the most terrifying, plague-like buboe clouds had unfortunately been blown Eastward with alarming velocity. The pictures I snapped don't capture bowel-loosening drama of the storm's leading edge but it was every bit as irritated and ominous as the image above. While the wind and rain that followed moments later was intense, the storm itself was pedestrian and common compared to the unprecedented rapidity and sudden-drama with which it emerged. Driving around the next half-hour, steering around the usual fallen limbs that accompany our summer storms, the talk-show hosts and weather folks on 1210 and KYW echoed and confirmed my impression that this storm packed a dark speed seldom seen in our area.

Fortunately, the radio-talkers also confirmed that unlike Elmira, NY earlier in the day, tornadoes and their extreme destruction were not part of the package -- this time. Sudden, heat-included, violent storms of this nature are known as "Derechoes". Scientist indicate one derecho every 2-4 years is a historical average for the Delaware Valley. We've now had 2 in two weeks. Kind of scary, but when it comes to likely climate-change-induced extreme weather, all-in-all I'd rather be in Philadelphia where our extremes are milder than much the rest of the nation.
Posted by Ted Gross at 3:34 PM

Don't be fooled by its relatively non-descript facade and unassuming location at Lancaster and Ardmore Avenues. The Tired Hands Brewing Company (16 Ardmore Ave., Ardmore, Pa.), is the most exciting drinking/dining development Ardmore  has seen in years. The brainchild of youthful brew-master Jean Broillet IV, Tired Hands presents a delightful brew pub experience that is bound to become a cherished cove for refreshment and tasting exploration.

While this space is primarily reserved for topics related to R5-area Real Estate and not Mystery Muncher reviews, R5Realty News&Notes observes that Quality of Life is key to residential real estate values and desirability. We assert that Tired Hands Brewing Company boosts quality of life on the lower Mainline.


With its Portlandian ethos, vibe and decor, THBC is the essence of Relaxed Craftsmanship and dedication to a high standards. Its specialty is the French/Belgian Farmhouse Ales brewed onsite and available on tap in serving sizes (4oz. only $2), which encourage experimentation and adventure. Whether its Broillet or one of the knowledgeable staff behind the bar, the alchemy of what's flowing is made accessible and interesting for the both the lay-quaffer and the afficianado alike.

THBC's culinary model is inspired by the fare of the traditional Belgian/French cafes . The menu is inexpensive, simple and satisfying, consisting primarily  of cheese and charcuterie plates and sandwiches. Ingredients are sourced locally, within 100 miles whenever possible and include cheeses and meats from locales such as Chester Springs and Warminster. I sampled the Lancaster Bologna and Cheese pannini with a side of tangy gazpacho, which went great with

Come to the Tired Hands Brewing Company with friends, something engaging to read, or a willingness to engage your fellow patrons. The first-floor pub space is handsome but kind of a tight squeeze when crowded; however, the wide-open upstairs room offers ample and airy space to unwind. By design there is no Television in the brew pub. Like I said, its a throw-back place but in a progressive kind of way.


Broillet sums up THBC's ethos on the establishment's website:
"We value local over imported, small batches over mass production, and striking a successful balance between giving back to our community and personal profit.  Localization guides everything we do, from sourcing raw ingredients and materials, to employing area talent." 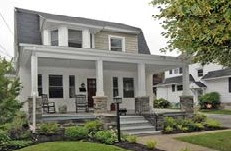 This 1800 sf single in the Brookline section of Havertown recently sold for $325,000, plus a $10,000 sellers assist for closing costs. Very handsome home with large remodeled kitchen, sweet backyard and in walking distance to Brookline shops. The net buy price of 315k represents an approx 10% discount from previous sale price in 2007, not uncommon for area homes' descent from peak value.