﻿﻿﻿Below are Philadelphia condominiums and houses which sold in April  for under $1 Million. This monthly market sales capture is limited to homes in the western part of Center City, as well as the Art Museum Area.

Note the Last Price, indicated below, was the final listed price before the property went under contract. In many cases, the Original Price was much higher.
Posted by Ted Gross at 6:44 PM

The Rock Sculpture Ruminations of a Narberth Real Estate Agent

Leaving the General Wayne Inn,  I passed by the Lankenau Hamper Shop  and noticed a man doing some maintenance on the small rock sculpture steps from Montgomery Avenue. For at least a year or so, these pint-sized megaliths - which are scattered throughout R5/Main Line-area neighborhoods and environs - have been a source of pleasant vexation for me.

I've always imagined these stone mini-strosities might have been inspired by the Delaware Valley's Welsh settlement roots. As noted in Wikipedia, The Main Line area was first resettled by Europeans in the 1600s, when William Penn sold a tract of land, called the Welsh Tract, to a group of Welsh Quakers for ten cents an acre. This accounts for the many Welsh place-names in the area, as well as some the Welsh-related traditions, including that of creating large piles of stones or boulders, like the one gracing the hillside and demarcating the Radnor exit to I-476.

These man-made heaps of stone, also called Cairns, have been a mainstay in Wales for hundreds and hundreds of years. Some were created as landmarks or guideposts for travelers, some are property-line or burial markers, and some may even have astronomical significance. What motive, I wondered, could the middle-aged man on Montgomery Avenue have behind his mini-liths?


Turns out a handful of local newspapers and bloggers have already Uncovered The Story  behind these sculptures, which grace several train stations and at least one excellent sushi restaurant in Lower Merion and Radnor Townships. Ed Bassner, a longtime Wynnewood resident and local dentist, is the man who creates and maintains these delightful stone creations. Bassner told the Main Line Times that no motivation, historical, cultural, or anything other than purely aesthetic, are imbuing his efforts. 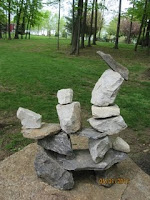 But there are wonderful stories related to the location, creation and maintenance of each funky, contemporary Cairn, and Bassner shares them on his very entertaining blog and photo gallery,  Rock Sculptures.

Bassner's forms may not possess the gravity of a Stonehenge - or the backstory and unfortunate tradition of sneakers hanging from telephone wires - but his work and dedication exude a sense of grace and elegance that is timeless, mysterious, peaceful and fun.

﻿﻿﻿﻿﻿﻿﻿﻿B﻿﻿﻿﻿﻿elow are the Lower Merion and Narberth homes which sold in April 2011 for less than one million dollars.
Many of these homes are located within minutes of Ardmore's elegant Suburban Square, which opened in 1928 and is widely regarded as the first shopping center in the country.

Note:  The "Last Price" indicated below was the list price just before each home went under contract. In many cases, the original listing price of the home was much higher to start.﻿﻿
Posted by Ted Gross at 6:22 PM